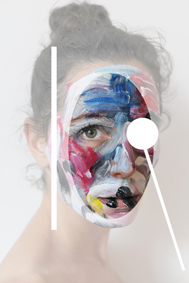 Ana Lessing Menjibar confronts a traditional motif in the history of art, the female portrait. The aim of this project is to put an end to the historical linearity of male speech about female body, because the view of men has traditionally configured women’s physical appearance in visual art.

In this case we find the vision of a female artist on the face and body of the woman. The techniques used by the artist form a kind of palimpsest. Lessing Menjibar applies oil on the body of the model. Then she takes a photo and paints directly on it. Finally this photo is given a graphic or digital treatment.

In this way, Ana’s work is a departure from the common distance between the model and the artist. Using layers that she superimposes on top of the original image, she creates a great variety of sensations and interpretations of these images.