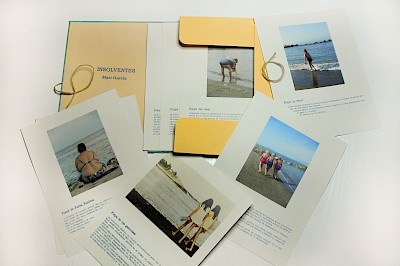 This artist’s book consists of thirty one digital photographs of women taken on the same beach during two summers. The photographs are printed on recycled paper. The texts have been written by the artist except for seven of them which belong to different authors.

In Spanish insolvente means someone unable to sort out situations, a negative attribute that it is the common denominator of the stories.

The truth or falsehood of the stories plays a secondary role, the important thing is the space and the way the bodies inhabit it; what matters are the relentless voices, an echo that never ends, moving between reality and invented memories. 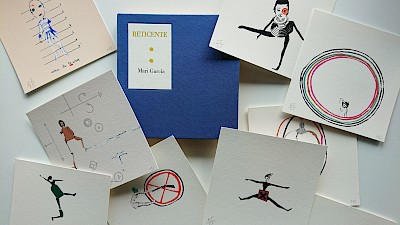 The title of the book is inspired by the personality of these women. They all have a reluctant attitude. They mistrust and remain silent. Some of them revolve around a void depicted by ropes and circles.

This piece is an approximation to a female universe that expresses itself through gestures. 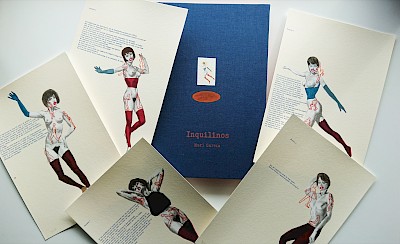 This artist’s book consists of ten hand-coloured silkscreens with texts.

This work takes Pop Art as a reference. 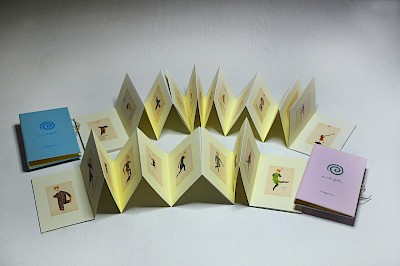 To create this book the artist chose a notebook with fold out pages that, once opened, form a kind of accordion. This form helps a visual narrative. For the collage papers and old books found in flea markets have been used.

Jeu de fille 1. The female characters show almost impossible postures like a tightrope walker. They suffer some defects they show ironically and gracefully. The illustrations are inspired by old cards.

Jeu de fille 2. The illustrations of this book evoke word games and double-meaning jokes, phrases that can provoke misunderstanding like some of the little scenes represented. It is an invitation to make jokes as if we were children that laugh at everything.

The artist’s book has a fragmentary character. We presume that this fragmentation comes from the different languages that cross the pages and are involved in its making. These languages create unexpected relationships: alliances, clashes, interruptions or silences. All these tensions show the search for a communication system.

Its space is inhabited by drawings, texts, photographs, silkscreens, boxes made of wood, paperboard or metal. You can add whatever items you like, but you always have the suspicion it is unfinished.

All this makes up an artifact that we call an artist’s book, first cousin of assemblage, a simple object that allows a visual narrative.

A fetishistic nature is added to its fragmentary character. Marcel Duchamp was able to see it, in his boite verte, where the artist reproduced his work in miniature. He did not forget to set in the tiny shelves of the box photographs, drawings and notes that at first glance look like little pieces of paper.

In an artist’s book lies a fascination for a closed world, a miniature world that ignores the market rules.