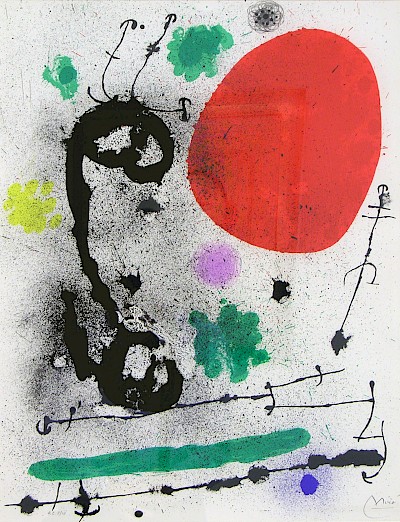 Paper: Rives vellum | Edition: 75 + 10 H.C. | Publisher: Louis Broder, Paris | Printer: Mourlot, Paris | Commissioned by Louis Broder in 1970, Miró executed three series of lithographs under the titles of "El pájaro migratorio", "Las perseidas" and "Los videntes". Due to Louis Broder's death, it has been impossible to ascertain the number produced of these lithographs — lithographs that have not been commercialised. Only a few "Hors Commerce" have appeared in the Galerie Berggruen catalogue. There is the possibility that each of the above series had an edition on Japan pearled paper as well as 5 H.C., 75 on Rive vellum and 10 other H.C.. The Rives vellum presented the “LB” watermark.